Dr. K, a Microdissection of my testicles (MicroTESE) was recommended? What is it and should I consider doing it?

Certain azoospermic men may be be candidates for a special procedure called a Microdissection of the Testicles (MicroTESE): Pioneered at Cornell University in 1999, MicroTESE uses microsurgical instruments and an operating microscope to carefully search for hidden islands of sperm production that can be used for In Vitro Fertilization. A small incision is made in the scrotal skin and the testicle is delivered. A large window is made in the testicle itself so that your male fertility specialist can begin the process of “search and rescue.” Systematically, your doc will begin “searching” every part of your testicular factory one aisle at a time in search of an assembly line that may still be producing sperm. If sperm production can be found, they are then “rescued”. They are selectively retrieved under a microscope. This approach allows your male fertility specialist to optimize the yield of sperm while minimizing the amount of tissue removed from your testicle. The tissue containing sperm is passed on to the embryologists who will process the tissue in preparation from IVF/ICSI.

The risks and complications include but are not limited to bleeding, infection, injury to the testicle, depleting the amount of hormones that are produced by your testicles and chronic discomfort. While all of these are unlikely, they are possible so it is important that you discuss them with your male fertility specialist. 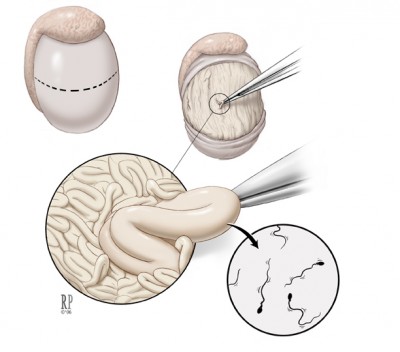 The goal is to find small islands within the testicle that are still producing sperm that can be retrieved for IVF.

Dr. K, are there predictive tests that can better define what MY chances are of sperm being found after a MicroTESE?

The most predictive factor that we currently have is a testicular biopsy. A biopsy is a minor 30 minute procedure where a small window is made in the testicle through which a tiny rice kernel-sized segment of testicular tissue is obtained. This tissue is then examined with a microscope at 400X magnification by a pathologist. Through this biopsy, we hope to obtain a quick glimpse at what may be going on in your testicular factory in that one area that we looked at. Are the assembly lines for sperm production present? Do we see sperm at all the stages of production? Are there enough assembly lines? Based on these simple questions, we can describe what is going on in that piece of tissue using some fancy medical terms: Sertoli Cell Only or Germ Cell Aplasia (when there are no sperm assembly lines seen), Maturation Arrest (when we see assembly lines but the production is stopped prematurely) and Hypospermatogenesis (when fully functional assembly lines are present, but there simply are not enough of these assembly lines to generate enough sperm to be seen in your semen). 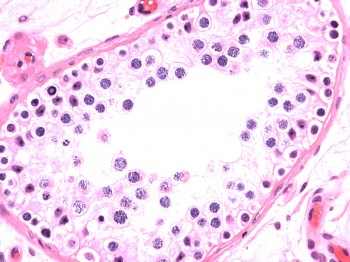 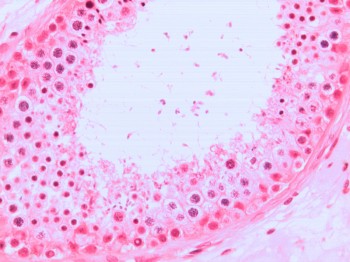 What Normal Sperm Production Should Look Like in the Testicle

The testicular biopsy can help predict the chances of finding sperm on a Microdissection of the testicles. In a group of 135 men, sperm were found in 51% of men with Sertoli Cell Only, 83% in men with Maturation Arrest and 100% of men with Hypospermatogenesis (Ramasamy et al., J Urol, April 2007, 177: 1447-1449). Some men like having a biopsy since it gives them a better idea of what their chances are. For other men, they believe that “it is what it is”.

Dr. K, if you do a microsurgical dissection of my testicles to look for sperm, what are the chances that you find any?

A research team out of Cornell University has been at the forefront of answering this very important question. Looking at the outcomes in 563 men who underwent 684 MicroTESE (Microdissection Testicular Sperm Extraction) procedures, they found sperm in 61% of cases. (Schlegel et al., Video Abstract #V1534, AUA 2007). Obviously, it is not impossible to find sperm; however, it is a little more than a flip of a coin that sperm can be found. It is important to highlight the 61% number is for all patients having this procedure. See below how a biopsy can help narrow down what your chances may be.

Sertoli-Cell Only
In a series of 373 patients with Sertoli-Cell Only on testicular biopsy, MicroTESE was successful in retrieving sperm in 45% of these men. Pregnancy rates with IVF/ICSI were approximately 50%.
Lin, K. et al. Sertoli Cell-Only Pattern (SCO) Does Not Always Cause Elevated FSH: Impact on Sperm Retrieval Results in Non-Obstructive Azoospermia (NOA); American Society of Reproductive Meeting 2008, San Francisco. 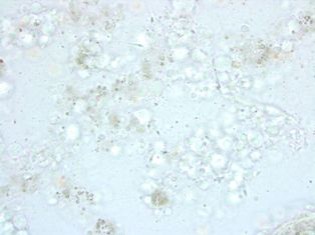 Using a table-top microscope at 400x magnification, we look for complete sperm hiding among the forest of other cells in the testicle.
A sperm is seen near the top middle of this picture.

Dr. K, A MicroTESE sounds pretty involved and the chances of success are not a “slam dunk” in my favor? Why else would I want to pursue this?
With a sperm retrieval rate of only 61%, an important reason that some men still pursue a Microdissection of the Testicles is because they want to have no regrets . They want to know that they tried their very best to find their own sperm. They don’t want to be asking themselves years down the road “what if I had done it and what if they had found sperm.” For some men, it is important to know that they did everything they could that was humanly possible to find their own sperm. Obviously, the decision to pursue a Microdissection is challenging. For some, it involves a lot of soul-searching and introspection and lots of long conversations late at night with your loved one(s). We know it is not easy. As a result, we offer free consultations with our Fertility Counseling Specialists Wallin and Luna right here in our office.