New vasectomy reversal microsurgery techniques makes the procedure more reliable than ever. Microsurgery involves the microscopic visualization of the vas deferens and small, precise tools that restore fertility in men. There are two types of vasectomy reversal procedures Dr. Kuang may perform, vasvasostomy or vasoepididymostomy.

Procedure for Your Microsurgical Reversal Vasectomy 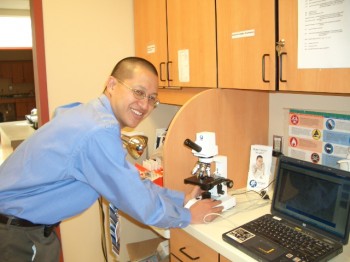 Vasectomy reversals begin with the administration of local anesthetic to the scrotal area with “twilight” anesthesia in the office. Dr. Kuang will then make a single mini-incision on the scrotum to locate the vas deferens and the site of the original vasectomy.

Dr. Kuang developed the “Vasectomy Reversal Predictor” to determine which type of surgery you will need with an accuracy of more than 80%. Whichever microsurgical reversal vasectomy you require, you can depend on Dr. Kuang and his staff to ensure you are comfortable before, during and after the procedure.

Reach our vasectomy reversal microsurgeon by calling Southwest Fertility Center for Men at 855-4VR-CONSULT (855) 487-2667 for a FREE consultation!